In the past 2 years over 25 FSI enterprises have explored CloudHedge to automate modernization of legacy apps.

Applications within FSI enterprises are two kinds, the back-office apps and the external consumer apps (end customers or partners/vendors). Most of these applications were built with legacy technologies and are difficult to quickly add/fix features or hot-fixes. Some of the applications even take 3 months before a fix can be released for the end-users. Lack of agility reduces user-experience and the enterprise starts leaking revenue and profitability. Following is a mix of applications which we have come across in most Insurance enterprises.

How can FSI applications be modernized and be more agile and resilient? Can we isolate app(s) and modernize them in silos? Most of the time these sets of questions end up in an application portfolio rationalization exercise.

FSI enterprises have spent $250k or more for approx 100 applications to be rationalized for modernization. Using CloudHedge, enterprises have spent a fraction of that in getting an assessment report for CXOs, distributing apps into Re-Invest, Retire, or Retain. They also get to know how much license cost can be saved if they had an option to re-platform an app hosted on a closed system (AIX/Windows) to a more open source system (Linux). All of 100 apps can be rationalized for modernization in 4 weeks. It covers a span of COTS and bespoke applications.

Surprisingly, for us, most enterprises don’t have an entire list of apps (read assets) they have in their ecosystem. Some were created for a special/ seasonal program and even after the program ended they were being used and were dependent on other applications. External facing (aka front office)/revenue leaking apps are mostly on priority lists for agility and scalability.

Once the business owners/stakeholders have mapped the recommendations with their priorities and budgets, there is a revised list of apps which need to be reinvested/retired/retained. Reinvested apps are broken down further into rehost, replatform, refactor (process level), and rewrite (source code). In our experience, i.e without CloudHedge Discover, most FSI apps are listed under rehost or rewritten category.

When FSI enterprises come across CloudHedge tools and the benefit it brings for them, they get an option of Refactoring applications at process level. Process level refactoring does not require a complete rewrite and yet can accrue benefits of cloud. One gets to scale an application at process level instead of scaling an entire application (in case of rehost) which reduces the cost of cloud infrastructure and reduces OpEx significantly. 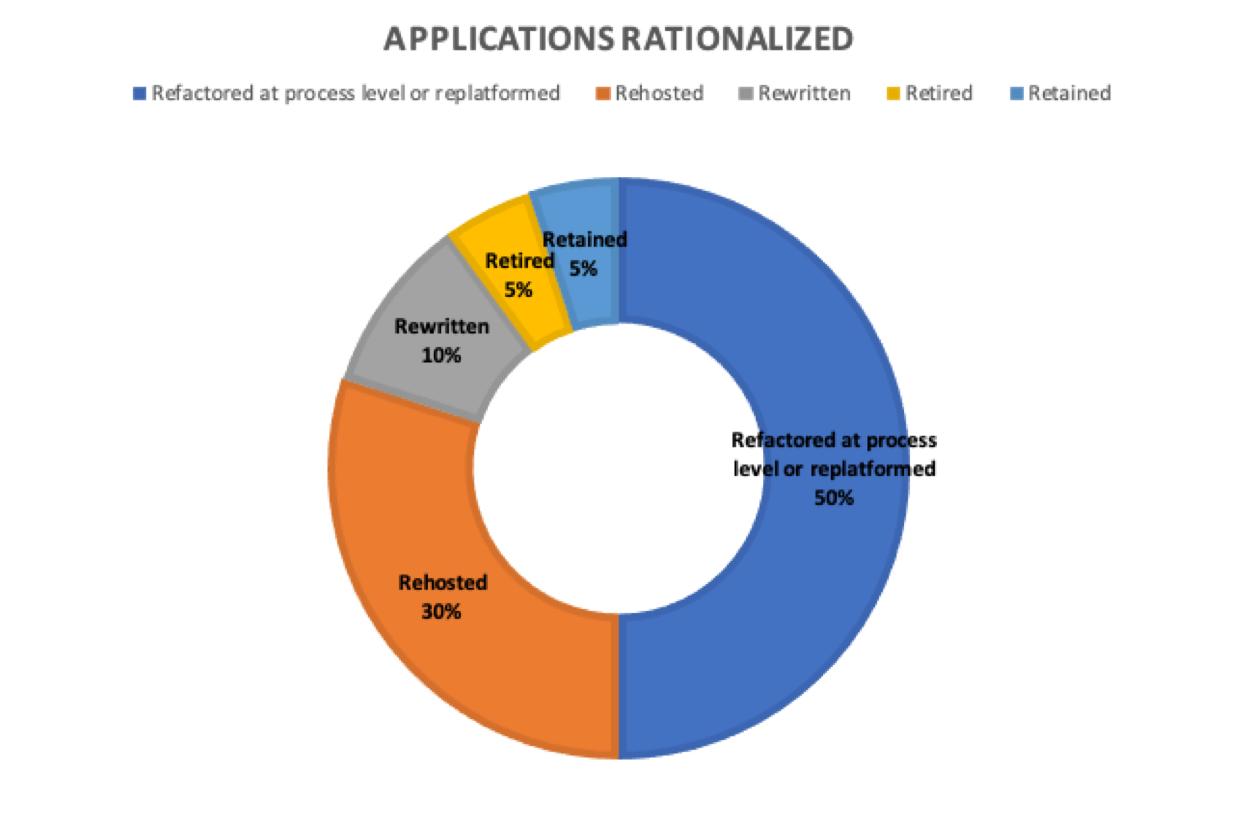 Before using CloudHedge, almost all FSI enterprises were aiming to rewrite applications and adopt microservices. Most enterprises understood what micro-services entails in terms of business benefits, some of them just heard of the new buzz word (shiny toy) and wanted to explore options. Soon they realized the road to micro-services is expensive and time consuming e.g. one Bank spent 8 months just designing its microservices architecture. Converting all applications into microservices architecture is not practical, unless you have a lot of time and budget.

With CloudHedge, applications earmarked for refactoring at process level or replatform have been modernized in 3 to 4 months. So, within 4 to 5 months applications have been assessed, refactored/ replatformed, and deployed onto a new target environment.

FSI enterprises have extended RFP to vendors to rehost their apps in 6 months. Why rehost your apps to cloud in 6 months when you can refactor your application within the same time. Skip the usual first step of only rehosting apps and directly refactor the applications. Once you have refactored the apps at process level, they can be earmarked for microservices by adopting a strangler method. Carve our microservices at regular intervals and operate along with containerized apps. Accrue the benefits of cloud in a much shorter time by accelerating modernization of applications.